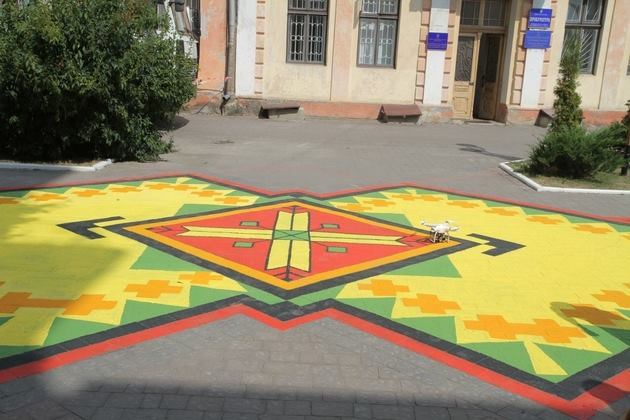 Nadvirnaya activists have ornamented the main square of the town Nadvirnaya. Several tens of meters of Huzul ornament performed in authentic colours with TRIORA paint were drawn on Shevchenko Square and further, on the Nadvirnaya hundred-meter race up to the Town Hall.

“We decided it would be a wonderful ornament for the International Huzul Festival which will take place in our town within September 11-13. It is on this central square that craftsmen of household art will exhibit their works” – says Tatyana Prishlyak, the activist of VOLYA (Will) party. “Thanks to our pattern, the central street of the town has assumed another appearance, and after the event such vyshivanka (embroidered shirt) will impart brightness to the city. We hope that this beauty will force local authorities to pay attention to peeling facades of buildings and blatant signboards which a priori spoil visual style of the town”.

The event organizers, among whom was Director of Nadvirnaya children’s art school Jane Bondarenko, tried to fit a drawing which will be an ideal supplement to paving stones of the main square inlayed as an ornament.

“Today, Ukrainians proudly put on vyshivankas, so we decided to put it on our city. We were thinking over the drawing for several days and chose an ornament in the form of a gerdana – a traditional Huzul women’s adornment. Warm colouring of the figure was not a random choice, it is characteristic of our Huzul region” – Jane Bondarenko explains a drawing plan”.

Tens of Nadvirnaya residents joined the event organizers, everyone who wished had an opportunity to take a brush and make his or her contribution to the patriotic drawing. Local children were especially pleased with such initiative.

It is pleasant to realize that our company joined this colourful event – the drawings were made with TRIORA Acrylic Facade Paint which had been tinted at a tinting studio of Ivano-Frankovsk branch warehouse.