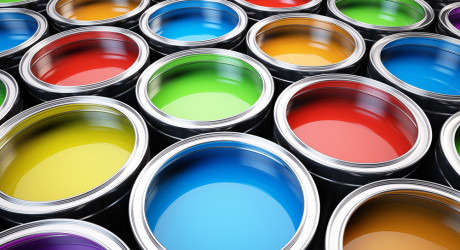 Bright colors always attract attention, making our lives more colorful. However, just few of us wondered how safe are such colors?

In fact there are many businesses which use lead as a pigment to create a bright and rich colors in theirs paint industry. Due to its harmful effects on the human health a lot of European countries have adopted laws governing the use of this toxic substance. Lead injures the central nervous system and brain. Also it injures the circulatory system, kidneys and even bones. Also lead injured pregnant women: child can have genetic changes and reduction his intellectual level.The greatest impact of lead is on the child’s organism. Every year from lead poisoning die about 143 000 people.

But in spite of this, and the prohibition of lead, nowadays many industrial enterprises continue to add it in the paint.

To draw public attention to this issue in October 2016 all over the world was declared a week of action, which prevents the poisoning of lead paint.

As a part of this week’s National Environmental civil organization “MAMA-86” by the initiation of an international organization WHO will hold a press – conference. The topic of the conference is “Invisible killer in our house: the health consequences of the using lead paints for Ukrainians”. At the conference will be announced the results of research Ukrainian paints and people will know which paint has lead content.

It should be noted that during this period, such studies have been conducted throughout Central Europe. As it turned out, the greatest amount of lead found in bright colors: yellow, orange and red. These colors are most often used for painting of kindergartens, playgrounds and many other organizations for children.

According to studies, the maximum amount of lead in paint, produced in Tajikistan and Belarus (see. Chart №1). As for Ukraine, only 30% of Ukrainian industrial paint enterprises used invalid norms lead in their paint materials. Against the background of the general trend – it is the lowest percentage, although it should be noted that Ukraine at this stage does not have any legislation that would regulate the amount of lead in paint and varnish in contrast to the same Russian.

It should be noted that earlier the company “ZIP” used lead for single products, but more than 10 years it does not use this harmful and toxic substance in their products taking care about their consumers` health.